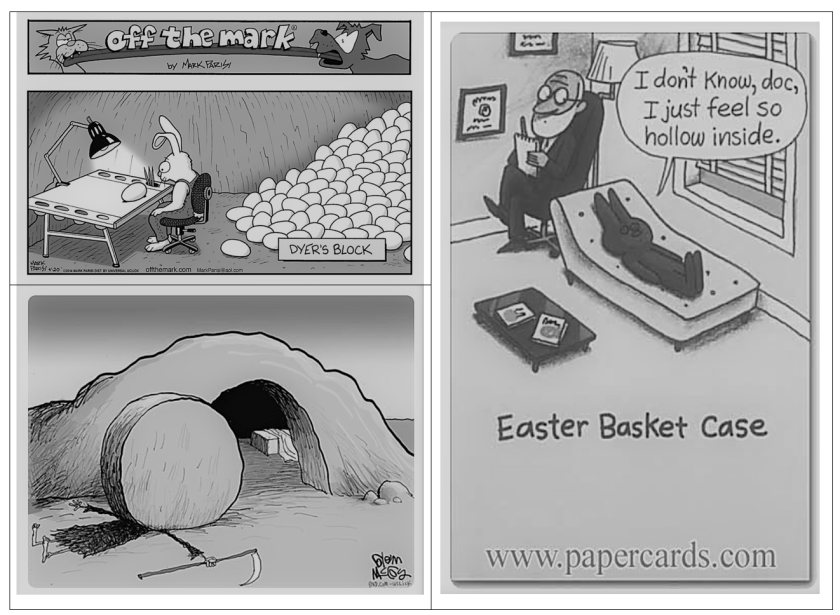 My Musing – Originally I had “dyer’s” block with respect to today’s musing.  It is, after all, Easter morning and how does one do an amusing on such an important topic without seeming sacrilegious?  Without participating in the diversion and dilution of the message of this Holy day that modern culture has been so successful in perpetuating?

I’ll start by recounting a memory from my early childhood.  My first memory of receiving a chocolate bunny for Easter started with excitement and ended in disappointment.  As a small child, I was originally captured with the bright foil wrapping, not realizing the chocolate delight that lay beneath.  But once I peeled off the foil, I feasted my eyes on the biggest piece of chocolate I had ever had – and it was all mine.  No need to share with my brothers (I really was not too good with sharing candy anyway).  But that first bite (yes, the ears), led to major disappointment.  It was not solid.  It was hollow inside.  Much less chocolate than I originally thought, leaving me with an empty feeling inside (pun intended).  It was a hollow promise.

But the real Easter present is not disappointing.  Jesus promised an empty tomb after three days and it was.  No “hollow” promise from the Son of God.  The soldiers had sealed the tomb preventing any would be grave robbers.  But there was no need.  There was nothing to rob.  The tomb was empty on that first Easter morning – just like He said it would be.  The disappointment would have been a tomb with a body still in it, with death’s sting still intact.  But He is risen, He is risen indeed.

My Advice – If you have not yet done so, unwrap the free gift Jesus offers.  Free because He paid the price on the cross three days earlier.  You will not be disappointed because the empty (“hollow”) tomb leads to a full and everlasting life from Him.  Let the empty tomb remove the emptiness in your life.

One thought on “Hollow Promises?”