My Musings – “We who have lived long under the Shadow may surely listen to echoes from a land untroubled by it?” (From “The Return of the King,” J. R. R. Tolkien). The shadow we live under grows longer and the darkness and distress spreads. For “immediately after the distress of those days ‘the sun will be darkened, and the moon will not give its light; the stars will fall from the sky, and the heavenly bodies will be shaken.’” (Matthew 24:29, NIV 1984).  But once again, “the people living in darkness [will see] a great light; on those living in the land of the shadow of death a light [will] dawn.” (Matthew 4:16, NIV 1984).  “For as lightning that comes from the east is visible even in the west, so will be the coming of the Son of Man.” (Matthew 24:27, NIV 1984).

Afterwards the “distress of those days” will be no more than “echoes from a land untroubled by it.”  For “now the dwelling of God is with men, and he will live with them. They will be his people, and God himself will be with them and be their God. He will wipe every tear from their eyes. There will be no more death or mourning or crying or pain, for the old order of things has passed away.” He who was seated on the throne said, “I am making everything new!” Then he said, “Write this down, for these words are trustworthy and true.” (Revelation 21:3-5, NIV 1984).

My Advice – Just try to imagine it. The “great glory.”   What John saw was so unimaginable, that the best way he could describe it was what was not there.  The things (tears, death, mourning, crying, pain) that we will be “untroubled by.”  For “the old order of things has passed away.”  Yes, in this world we will have trouble that we have to live under.  But take heart, He has overcome the world! 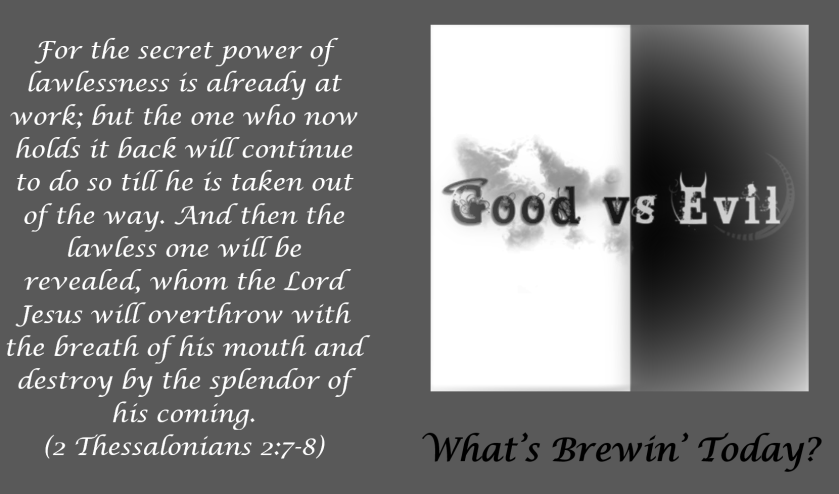 My Musings – “It’s like in the great stories, Mr. Frodo. The ones that really mattered. Full of darkness and danger, they were. And sometimes you didn’t want to know the end. Because how could the end be happy? How could the world go back to the way it was when so much bad had happened? But in the end, it’s only a passing thing, this shadow. Even darkness must pass.”  (Sam Gamgee, The Two Towers, by J. R. R. Tolkien).

All the great stories are full of darkness and danger.  Good pitted against evil. Suspense over which would prevail, as they were equally balanced against each other so that the outcome balanced on the edge of a razor.  Good did not always triumph.  Evil was never fully vanquished – only for a season before it took shape once again.

What about our great story?  In these “last days” as the darkness grows, “how could our end be happy?”  “How [can] the world go back the to the way it was, when so much bad [is yet to come]?” It cannot.  But that does not mean evil wins. Evil has been doomed from the beginning. Even though very powerful, it “will be [overthrown] by the breath of His [Jesus’] mouth and [destroyed] by the splendor of His coming.”   “In the end, it’s only a passing thing.  Even darkness must pass.” Because light always extinguishes darkness, chasing away even shadows.  Darkness cannot dispel light.  With all the power this “tower” of darkness has, it does not have that power.

My Advice – There stands two towers.  You must swear allegiance to one or the other.  No choice is a choice for the tower of the prince of this world.  As we’ve seen, his time is short.  In the end, he is the one who loses.  That end has never been in doubt.  Wouldn’t you rather stand with the tower in God’s Kingdom?  Choose Christ and His Kingdom of Righteousness.  It’s coming.  He’s coming.  Can’t you hear the trumpet sounding?  Can’t you hear the shout of the Arch Angel?  Look to His coming, look to the east for “The Return of the King.”  It won’t be much longer now.  It is sooner now than when we first believed.  “Amen, come Lord Jesus!“

My Musing – “The world has changed. I feel it in the water. I feel it in the earth. I smell it in the air. Much that once was is lost. For [few] now live who remember it.  Some things that should not have been forgotten were lost. History became legend. Legend became myth.”  (Galadriel, The Fellowship of the Ring. J. R. R. Tolkien).

It exploded in the first century in the face of great persecution.  Later, persecution gave way to proclamation as Christianity was became the official religion of the Roman Empire. There have been times of retreat (the dark ages) and resurgence (the great awakening), but the “gates of hell” have never fully prevailed.

Yet in my lifetime, “the world has changed.”  I feel it and smell it. History, is now largely regarded as myth.  The age of “reason” has relegated Christianity to no more than a crutch to the superstitious.  Even those within the Church are abandoning the faith and “sound doctrine” in favor of whatever their “itching ears” want to hear.  Things that should never have been forgotten have been lost.  The “breaking of the fellowship” is well underway.  The “Return of the King” is near.  Yet much evil is yet to come.  Which also reminds me of these quotes from “The Fellowship of the Ring.”

Frodo – “I wish none of this had happened.”

Gandalf – “So do all who live to see such times but that is not for them to decide. All you have to decide is what to do with the time that is given to you.”

My Advice – What will you decide “to do with the time that is given to you?”  Be a beacon of light in an increasingly dark world?  Be a herald of truth in an age of deception and lies?  Be the salt that gives flavor to what is becoming more and more unsavory?  Be faithful to the end?  We’ve been given a commission to be the “ring-bearer” of the greatest story ever told.  Will you be part of the “fellowship?”