My Musings – The only reason to doubt eternal security is if the “salvation” experience was not genuine. But if it was genuine, it cannot be lost or taken away.

My Advice – You cannot lose your salvation by anything that you say or do, because “no one” includes you. But this does not mean you should live your life as you wish without concerns. God will discipline to bring correction (sometimes He even takes people home early), there may be lasting negative consequences (for this life) and you can lose blessings and rewards (this life and the next).

My Musing – There are two reasons why people might not know the His voice. First, they might not know Him, they are not saved. Second, while saved, they have not developed a close enough relationship with Him that His voice is recognizable.

My Advice – If you find it hard to know whether or not God is “speaking” to you, then you probably need to work on the relationship. Are you getting sufficient exposure to His Word by attending church regularly and daily reading/meditation, that when He speaks (through others, “feelings” circumstances, etc…) you know it is His “voice”?

PRAISE – After this I heard what sounded like the roar of a great multitude in heaven shouting: “Hallelujah! Salvation and glory and power belong to our God, for true and just are his judgments. He has condemned the great prostitute who corrupted the earth by her adulteries. He has avenged on her the blood of his servants.” And again they shouted: “Hallelujah! The smoke from her goes up for ever and ever.” The twenty-four elders and the four living creatures fell down and worshiped God, who was seated on the throne. And they cried: “Amen, Hallelujah!” Then a voice came from the throne, saying: “Praise our God, all you his servants, you who fear him, both small and great!” Then I heard what sounded like a great multitude, like the roar of rushing waters and like loud peals of thunder, shouting: “Hallelujah! For our Lord God Almighty reigns. Let us rejoice and be glad and give him glory! For the wedding of the Lamb has come… (Revelation 19:1-7a)

After This – With the martyrs vindicated, the scene shifts from mourning on the earth to rejoicing in Heaven(1)“After this” means END_OF_DOCUMENT_TOKEN_TO_BE_REPLACED

My Musing – A couple of things stand out. He took Jesus at His word on a big request. He did not ask for some kind of assurance or sign. He did not ask that Jesus go back with him. He simply believed and returned to his home.

My Advice – You can always take God at His word. The “trick” is in knowing when He is “speaking” to you. The better your relationship, the better you will be at knowing.

Luke 18:28-30 – Peter said to Him, “We have left all we had to follow you!” “I tell you the truth,” Jesus said to them, “no one who has left home or wife or brothers or parents or children for the sake of the Kingdom of God will fail to receive many times as much in this age and in the age to come, eternal life.” (NIV 1978)

My Musings – Few have to make these kinds of sacrifices for God, but when they do, it is a comfort to know that they will receive back many times over.

My Advice – Do not fret over things sacrificed for God. After all, they were only temporary anyway.

My Musings – More often than not, my blogs conclude with some advice.  Most (not all) are reflections from “A Dad’s Devotions,” a daily devotional that I wrote for my son when he graduated from college, and that I have been sharing on this site.   Apart from my son, who did not necessarily seek it, and those who come to me seeking it, perhaps it is a bit presumptuous of me to otherwise offer it.   Although I do try to make sure it is well-grounded in in the Word. Some you may think wise, and some foolish. Much of it comes from my life experiences or mistakes I’ve made along the way when I either did not seek advice when it was offered, of follow it when it was given.

My Advice – Here I go again. Now [my blog followers] were of more noble character than [those who google], for they received the message with great eagerness and examined the Scriptures every day to see if [the Brew’s musings and advice] was true. (A personalized paraphrase of Acts 17:11).  Don’t just take my word for it, take the Word for it.

As always, I welcome your comments and my daily musings.  God bless. 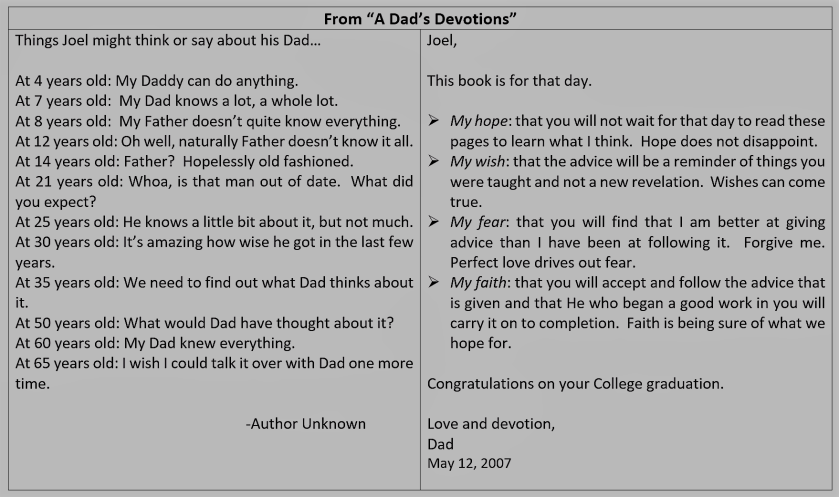 JUSTIFICATION OF JUDGMENT – “Your merchants were the world’s great men. By your magic spell all the nations were led astray. In her was found the blood of prophets and of the saints, and of all who have been killed on the earth.” (Revelation 18:23b-24)

Revelation 18:24 should be compared with Revelation 17:6 and Matthew 23:35. Satan has often used religion and business to persecute and slay the people of God. During the first half of the Tribulation, as the anti-Christ rises to power, religious, political and economic Babylon will all work together in opposing the Lord and His people. It will seem to many that God does not care. But at the right time, in the fullness of time, the Lord will bring vindication to His people by destroying both “the harlot” and the great city. God may be patient with His enemies, but when He does begin to work, He acts suddenly and thoroughly.(1) God is neither premature nor tardy. He is always timely (at just the right time).

Three reasons for Babylon’s downfall are given as justification:

• Greatness Measured by Wealth – “The merchants of the earth grew rich from her excessive luxuries.”

• Spiritual Apostasy – “By your magic spell all nations were led astray.”

• Persecution of Those She Could Not Lead Astray – “In her was found the blood of prophets and of the saints, and all those who have been killed on the earth.”(2)

Previews of Coming Attractions – Chapters 17 and 18 provided additional insight and information concerning the earth’s major religious, economic and political movements during its final seven years. The stage is now set for the climax of the Book of Revelation—the second coming of Christ (Revelation 19).(3) At this point, the religious, political and economic system of the beast has at long last been destroyed. All that remains are for Jesus Christ to come from heaven and personally meet and defeat the anti-Christ and his armies. This He will do. Then He will establish His righteous kingdom on earth.

Until that day, the important question for us is: Are we citizens of “Babylon” or citizens of heaven?(4)