ALL THINGS MADE NEW – He will wipe every tear from their eyes. There will be no more death or mourning or crying or pain, for the old order of things has passed away.” He who was seated on the throne said, “I am making everything new!” (Revelation 21:4-5a)

“Behold, I make all things new” is the first time since Revelation 1:8 that God is specifically referenced as speaking directly (who else would be sitting on His throne?), though voices have come from the throne (Revelation 21:3) and out of the sanctuary (Revelation 16:1, 17). While these too may be from God himself, they seem more likely to be coming from one of the angels in His Presence. The message here is not addressed to John (contrast Revelation 7:14; 17:7; 21:6; 22:6), but to the entire world of the blessed.(1)

The vision is so wonderful that the best way John found to describe it was by describing what it was not (i.e. “no more”). Ever since John first recorded this revelation, believers have rejoiced to know that, in Heaven, there will be no more pain, tears, sorrow, or death. This blessed hope of Heaven has encouraged God’s people in times of suffering.(2)

Little else is said here in Revelation about the future of mankind, aside from the implication that kings and nations still exist. Humans are still human (albeit with glorified bodies), not angels, and none who enjoy this new and endless existence are tainted by sin. To see more of what the future holds for us, we must look at other New Testament passages.

We Shall Be Like Him – We find that when we stand in God’s presence, we will be transformed into Jesus’ likeness. “We shall be like Him, for we shall see Him as He is” (1 John 3:2). Paul said that God has predestined us “to be conformed to the likeness of His Son” (Romans 8:29).

Raised Imperishable – Paul told the Corinthians that the believer’s resurrection body will be imperishable in contrast to our present perishable body. It will be marked by power rather than weakness. It will be controlled by the spiritual, rather than subject to the physical. The dead “will be raised imperishable, and we shall be changed” (1 Corinthians 15:52, see also verses 35–54). When the mortal becomes immortal, then death itself will be swallowed up in our great victory. In these words of Scripture, we see a glorious promise. But the scene is so far removed from our present situation that it is difficult to fully comprehend. We can perhaps see a bit more in the Gospel’s description of Christ after His resurrection. He could eat with His disciples. He had flesh and bones (Luke 24; John 21). Yet He also could “appear” among them in a locked room (John 20:19). He was recognizable, the same individual, yet at the same time different. These post-resurrection capacities of Jesus will likely be ours as well in resurrection.

Free from Our Sin Nature – The greatest wonder of all is that we shall be like Him, freed from every stain of sin. To be perfected and yet retain our individual self—this is our glorious destiny. “He who overcomes,” God promises, “will inherit all this, and I will be his God and he will be My son” (Revelation 21:7).(3) 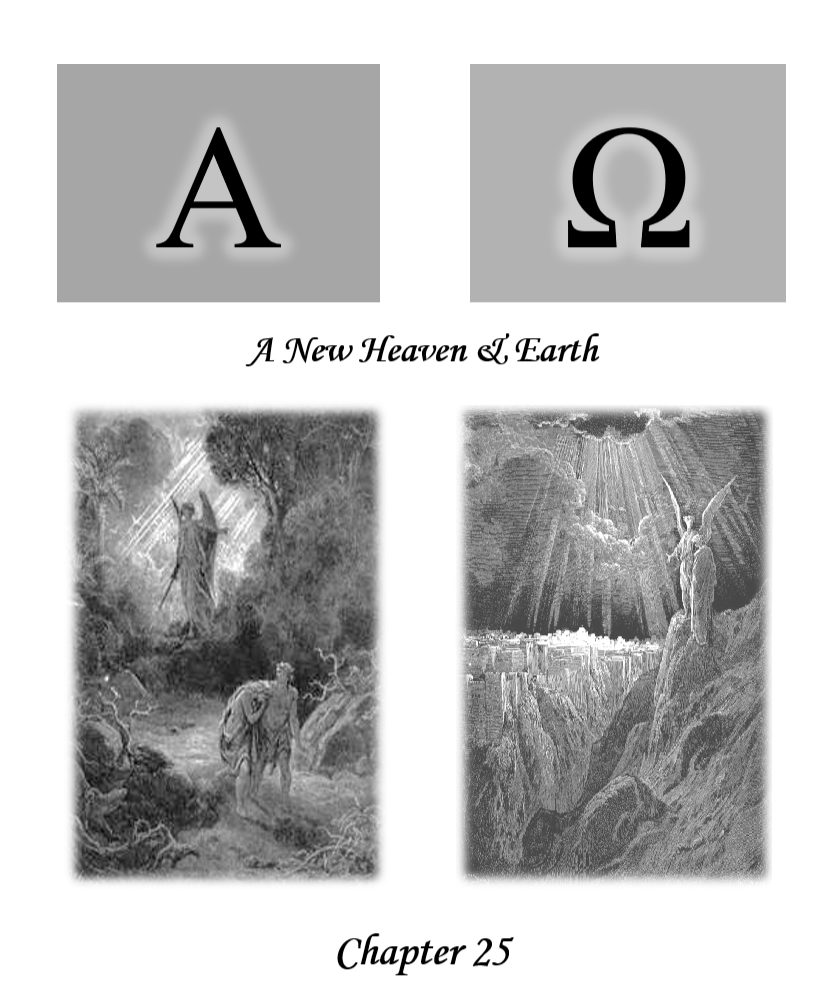 BEHOLD I MAKE ALL THINGS NEW – Then I saw a new heaven and a new earth, for the first heaven and the first earth had passed away, and there was no longer any sea. I saw the Holy City, the New Jerusalem, coming down out of heaven from God, prepared as a bride beautifully dressed for her husband. (Revelation 21:1-2)

The New Jerusalem –The New Jerusalem, “coming down out of Heaven from God,” is viewed by some as being separate and distinct from the earthly Jerusalem in which Israel in the flesh shall dwell during the Millennium, since it follows the creation of the new heaven and earth. When writing about the old Jerusalem, John uses a Greek term that is used in a political sense. John uses a different Hebrew term, that is used in a holy sense, when he refers to the heavenly city. Paul makes a similar distinction (common versus holy) when refuting Judaism (Galatians 4:26; Galatians 1:17, 18; 2:1; see also Hebrews 12:22). This Jerusalem from above is also referenced in Revelation 3:12 and Hebrews 11:10; 12:22; 13:14.(1)

Like any city, the old Jerusalem meant both the place and the people who lived there. In the same way, the New Jerusalem is a bride because its residents (people) are a bride (Revelation 19:7). Greco-Roman references to cities often described them as people. Jewish people were familiar with Old Testament personifications of Jerusalem and the Old Testament depiction of God’s people as his bride,(2) just as New Testament Saints are familiar with the references to the Church as the bride of Christ. Abraham “looked for a city … whose builder was God” (Hebrews 11:10). The New Jerusalem is that city.(3)

The fact that the New Jerusalem comes down from Heaven (it is not created) raises the question by some as to whether it will be in existence during the Millennium. The suggestion has been made that if the New Jerusalem is in existence during the Millennial reign of Christ, it may have been suspended in the heavens as a dwelling place for resurrected and translated saints, who nevertheless would have immediate access to the earth to carry on their functions of ruling with Christ. In the Millennium, it is unlikely that the New Jerusalem would rest on the earth, for there is an earthly Jerusalem and an earthly temple (Ezekiel 40–48). If such is the case, then the New Jerusalem would apparently be withdrawn from its proximity to the earth when the earth is destroyed at the end of the Millennium, and then return after the creation of the new earth. Though this possibility of a satellite city has been disregarded by most commentators, it would solve some questions surrounding the relationship between the resurrected and translated saints to those still in their natural bodies in the Millennium. Otherwise, these questions are left without an explanation.

BEHOLD I MAKE ALL THINGS NEW – Then I saw a new heaven and a new earth, for the first heaven and the first earth had passed away, and there was no longer any sea. I saw the Holy City, the New Jerusalem, coming down out of heaven from God, prepared as a bride beautifully dressed for her husband. (Revelation 21:1-2, NIV 1984)

The New Heaven – In ancient cosmology, there were believed to be seven levels of Heaven: the sky, the clouds, the sky above the clouds, the firmament (domed expanse separating celestial waters from terrestrial waters), and the celestial waters above the firmament, the heavens (the universe), and the heaven of heavens, where God dwells.(1) These have elsewhere been digested down to three: END_OF_DOCUMENT_TOKEN_TO_BE_REPLACED

Destination of Departed Souls – And I saw an angel coming down out of heaven, having the key to the Abyss and holding in his hand a great chain. He seized the dragon, that ancient serpent, who is the devil, or Satan, and bound him for a thousand years. He threw him into the Abyss, and locked and sealed it over him, to keep him from deceiving the nations anymore until the thousand years were ended. After that, he must be set free for a short time. (Revelation 20:1-3)

A variety of terms were used in the foregoing discussion which speaks of the afterlife and the destination of departed souls. Many terms are used interchangeably, yet they are not necessarily referring to the same thing. Following is a discussion of the main terms. END_OF_DOCUMENT_TOKEN_TO_BE_REPLACED

My Musings – Sometimes, perhaps more often than we care to admit, we view life through the lens of worldliness.  We may think we are seeing clearly, but we are only seeing a distorted view of what God intends.  We do not necessarily adjust as quickly as we might like (or as God might like) to seeing things through our Father’s lenses.  As we grow in Christlikeness, however, seeing through the worldly lens becomes blurrier and the seeing through the Father’s lens become clearer.  But even then we can only see a poor reflection in this life.  When we at least see Him face-to-face, we will no longer need corrective lenses.

My Advice – Look through the Father’s lenses (the Word, prayer, worship, fellowship, etc.).

Gift – Something voluntarily transferred by one person to another without compensation (www.merriam-webster.com).

Hebrews 9:27 – [M]an is destined to die once, and after that to face judgment, so Christ was sacrificed once to take away [save from] the sins of many people (NIV 1984).

Save – To deliver from sin.

Savior – A person [Jesus Christ] who helps people achieve salvation, or saves them from something [Hell] (https://en.wikipedia.org).

Jesus Christ – The only name that has the power to save (www.urbandictionary.com).

Acts 4:12 – It is by the name of Jesus Christ of Nazareth, whom you crucified but whom God raised from the dead …Salvation is found in no one else, for there is no other name under heaven given to men by which we must be saved (NIV 1984). END_OF_DOCUMENT_TOKEN_TO_BE_REPLACED