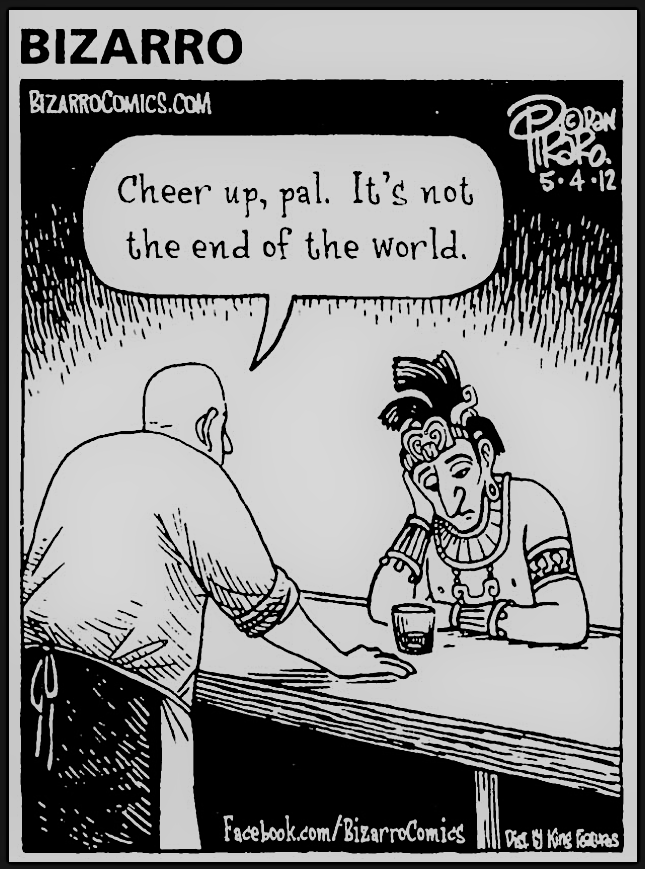 2 Peter 3:3-4 – First of all, you must understand that in the last days scoffers will come, scoffing and following their own evil desires. They will say, “Where is this ‘coming’ he promised? Ever since our fathers died, everything goes on as it has since the beginning of creation.” (NIV 1984)

The Mayan calendar is an ancient calendar system that rose to fame in 2012, when a “Great Cycle” of its Long Count component came to an end, inspiring some to believe that the world would end on December 21, 2012. The media hype and hysteria that ensued was later termed the 2012 phenomenon.  Of course, the predictions did not come true—just like hundreds of other doomsday prophecies that fizzled out in the past. (1)

2 Peter 3:8-10 – But do not forget this one thing, dear friends: With the Lord a day is like a thousand years, and a thousand years are like a day. The Lord is not slow in keeping his promise, as some understand slowness. He is patient with you, not wanting anyone to perish, but everyone to come to repentance.  But the day of the Lord will come… (NIV 1984)

My Musings – The world did not end in 2012, “just like hundreds of other doomsday prophecies that fizzled out in the past.”  But we have come to the end of my “Studies in Revelation” series.  I hope you found it somewhat enlightening.  There is much that we still find confusing and do not understand.  Perhaps we will understand more as the day approaches.  For even while Jesus told us that the day or the hour was not for us to know, He nevertheless instructed us to keep watch and be alert for the signs that His return might be near.

Christendom has been waiting and watching for over 2,000 years now and He still has not returned.  As a result, many have become scoffers saying ““Where is this ‘coming’ he promised?”   They have relegated the Lord’s promise to the myth of the Mayan calendar and countless other false prophecies of the past.  An empty promise that fizzled.

But Peter, in his second epistle, explained why the Lord might delay (He is patient with you, not wanting anyone to perish, but everyone to come to repentance),  and that delay does not mean slowness as we understand slowness (the day of the Lord will come).  The timing of HIs coming is uncertain, the fact that He will come is not.

Want to read it again?  Click on the link below to order your copy today.

My approach was to try and not be too dogmatic, but rather to present the differing viewpoints in as objective of a manner as I could, although I am sure my own bias has crept in here and there. I also wanted to avoid idle speculation on some of the more confusing imagery in the book (to not stain at a gnat and swallow a camel), choosing to focus more on the overriding theme. I am sure I wandered into the weeds here and there, however.

As you read this book, I urge you to focus more on the “blessed hope” of His certain return, and less on the manner of His return. Many got it wrong on His first advent, and we do not want to be among those who get it wrong on His second advent. Watch for the signs, but do not keep your gaze so fixed on the clouds that you lose sight of the work He left us to do until His glorious appearing.

My wish for all who read this book (but more importantly the underlying book of Revelation) the blessings that are promised in the Revelation 22:7.

“Behold, I am coming soon! Blessed is he who keeps the words of the prophecy in this book.” (NIV 1984)