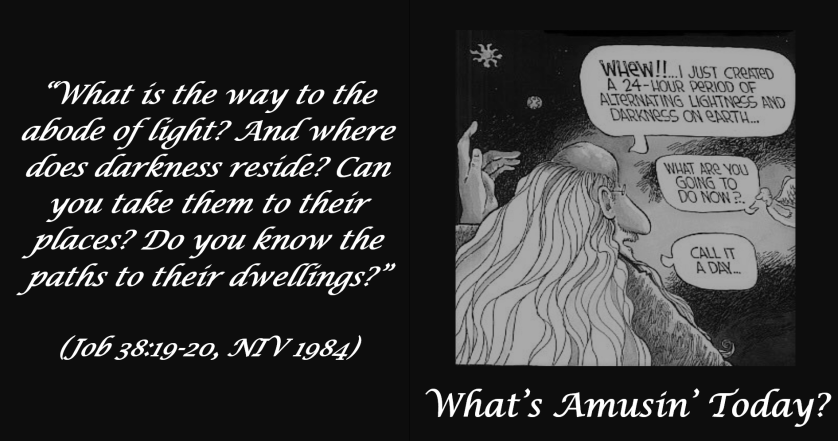 My Musings – What difference does a day make?  This is a question we should not take too “lightly.”

God Said – This phrase occurs repeatedly in the account of creation and means willed, decreed, or appointed. In each instance the spoken Word of God was followed by an immediate result. “I the LORD will speak what I will, and it shall be fulfilled without delay.” (Ezekiel 12:25).

Let There Be Light – The first thing God does is correct the darkness, for without light there is only chaos. The light was natural, physical light. Its creation was an immediate victory because it dispelled darkness. Light and darkness in the Bible are also symbolic of good and evil. Here began God’s work, which will culminate in the age to come when there will be no more darkness. “I am the LORD, and there is no other. I form the light and create darkness.” (Isaiah 45:6-7).

The Light Was Good – The Hebrew word used here, tov, has a broad range of meaning but generally describes what is desirable, beautiful, or right. God is declaring that what He has created is good. “Light has come into the world, but men loved darkness instead of light because their deeds were evil.” (John 3:19).

Separated Light From Darkness – The creation of light did not eliminate darkness, but rather was a separation of the light from the dark matter. On a macro-level, as the cosmos expanded following the “big bang,” the galaxies and stars that were formed grew further and further apart (separated), with the darkness of space in between. On a micro, level, with respect to the earth, the revolution of the earth on its axis, produced the ultimate separation between day and night. “For you were once darkness, but now you are light in the Lord. Live as children of light (for the fruit of the light consists in all goodness, righteousness and truth) and find out what pleases the Lord. Have nothing to do with the fruitless deeds of darkness, but rather expose them.” (Ephesians 5:8-11).

Day and Night – The division of time into day and night represents one of God’s first acts in the ordering of creation. God is bringing order out of the initial chaos. It’s clear that in the Creation account there are distinct sequences and order. Chaos and randomness are rejected. “The heavens declare the glory of God; the skies proclaim the work of his hands. Day after day they pour forth speech; night after night they display knowledge. There is no speech or language where their voice is not heard. Their voice goes out into all the earth, their words to the ends of the world.” (Psalms 19:1-4).

Evening and Morning – The expression “evening and there was morning” specifies the length of a “day” (yom, in Hebrew). While the author may have meant a 24-hour day, less specific interpretations are possible. The Hebrew word yom can refer to a 24-hour cycle [day and night, one revolution of the earth on its axis], the daylight hours [“God called light day”], or an unspecified future “someday.” The meaning of the word, though, does not settle the debate over whether the passage references a literal six-day creation or symbolic days. In addition, while the sun (which marks the change from evening to morning) was not created until the fourth day, presumably the earth was already spinning on its axis for the one revolution that came to mark our days. Following are some of the more prominent explanations for what is meant by “day.”

Literal 24-Hour Days – The days described in Genesis are literally 24-hour periods of time. This is indicated by the phrase “evening and morning” and the coupling of the Hebrew word yom with a number (e.g. “the first day”).

Day/Age – The days of Genesis are a chronological description of the remote past, where each “day” corresponds to a long period of time (e.g., the geologic time periods, eras or epochs).

Progressive Creation – Creation occurred over six 24-hour days, each of which was separated by long periods of time allowing His creation to “be fruitful and multiply.”

Literary Framework – The days of Genesis do not describe a linear sequence of 24-hour days. The first chapter of Genesis conveys a structured outline of creation activity where the description of days 1, 2, and 3 conceptually parallel days 4, 5, and 6. Days 1–3 are preparatory to the acts of days 4–6.  Charles Pfeiffer (The Biblical World, Baker) suggests this pattern:

Revelatory Days – The six days described in Genesis are 24-hour periods (more or less), but creation did not occur on those days. Rather, over the course of six days God revealed to the writer how He created the heavens and earth [perhaps like John received the Revelation when he was in the Spirit on the LORD’s “day?”].

Analogical – The six days of creation are an analogy for the normal human work week preceding the Sabbath.

Religious Polemic (Defense/Rebuttal) – The creation described in Genesis reflects ancient pre-scientific cosmology as understood by the ancients, and not the “science” understood by modern man. How one understands the days is less important than the actual purpose of the account, which is to assert that YAHWEH credited with the creation (defense), while discrediting the claims of rival deities (how we have come to revere science?) that are otherwise associated with the cosmology and its descriptive elements (rebuttal).

Appearance of Age – Simply stated, the idea of “creation with appearance of age” means that God created things to superficially look as if they had a been around for a while. For example, when Adam was created, he no doubt looked like a mature adult, fully able to walk, talk, care for the garden, etc. When God created fruit trees, they were already bearing fruit. In each case, what He created was functionally complete right from the start—able to fulfill the purpose for which it was created. Stars, created on Day Four, had to be seen to perform their purpose of usefulness in telling time; therefore, their light had to be visible on Earth right from the start. God’s proclamation that the completed creation was “very good” necessitated that it be functionally complete, operating in harmony, with each part fulfilling the purpose for which it was created.

Relative Days – Time is not absolute, or so said Albert Einstein. It is flexible. It can be stretched so it flows at different rates. But the different flows are only observable by comparing one flow of time relative to the other flow of time (relativity). Most people are aware that as speed increases, time slows down relative to time at slower speeds. Someone making a round trip to a distant planet traveling at the speed of light would age much slower than the loved ones he returned to. “For a thousand years in your sight are like a day that has just gone by, or like a watch in the night.” (Psalms 90:4). Fewer people are aware that as space stretches (and along with it the light waves are also stretching), time also slows down, and the universe has stretched a lot since the “big bang.” “He stretches out the heavens like a canopy, and spreads them out like a tent to live in.” (Isaiah 40;22)

So, how does this help reconcile 13.8 billion or so years to 6,000 or so years? Relative to God’s perspective (looking forward as the universe expanded), each day of creation was a literal 24-hour period. And it continued to be as He continued His creative work. Relative to man’s perspective (looking back on a universe that has expanded enormously) the collective six-days and the “earth” years that have since passed, the universe could very well be 13.8 billion or so years old [and 6,000 or so years old].

Regardless of which view one holds, there is no demonstrated conflict between creationism as it recorded in Genesis and scientific fact. The real conflict is not between God’s revelation in the Bible and scientific fact; it is between some interpretations of what the Bible says and the various scientific theories about the age of the heavens and the earth. In the end, these differences will be reconciled and “every knee will bow, and every tongue will confess” their Creator.

“And these are but the outer fringe of His works;
how faint the whisper we hear of Him!” (Job 25:14)

My Advice – “In the beginning was the Word, and the Word was with God, and the Word was God. He was with God in the beginning.  Through him all things were made; without him nothing was made that has been made. In him was life, and that life was the light of men. The light shines in the darkness, but the darkness has not understood it.” (John 1:1-5, NIV 1984).  Accept the light.  It will be the best “day” of your life.

One thought on “Let’s Call It A Day”