BEHOLD I MAKE ALL THINGS NEW – Then I saw a new heaven and a new earth, for the first heaven and the first earth had passed away, and there was no longer any sea. I saw the Holy City, the New Jerusalem, coming down out of heaven from God, prepared as a bride beautifully dressed for her husband. (Revelation 21:1-2, NIV 1984)

• Atmospheric Heaven (First) – The Old Testament writers viewed the atmospheric heavens as a “firmament” appearing as a great arch supported on foundations and pillars (2 Samuel 22:8) and spread out above the earth, with rain (the waters above the firmament) descending through its doors (Psalm 78:23). The keynote of Old Testament Scriptures that describe the physical heavens is set forth in Psalms 8 and 19:1–6. Elsewhere the Old Testament speaks of the atmospheric heavens as the region of the clouds (Psalms 147:8), winds (Zechariah 2:6), rain (Deuteronomy 11:11), thunder (1 Samuel 2:10), dew (Deuteronomy 33:13), frost (Job 38:29), and the abode of birds (Genesis 1:26, 30). It is also the locale of such destructive forces as hail (Joshua 10:11) and fire and brimstone (Genesis 19:24). In the New Testament, this notion of the vaulted expanse of the sky as the region in which the elements, clouds, and tempests gather (Matthew 16:2; Luke 4:25) and birds fly (Luke 9:58) is continued.

• Stellar Heaven (Second) – In addition to the atmospheric regions, the Hebrew idea of the physical heavens includes stellar space, which ultimately embraces the universe. The heavenly bodies of the stellar heavens were viewed by the Hebrews as manifestations of God’s handiwork without having any power or vitality of their own. These include the sun, moon, planets, and stars, which were but lights in the firmament of the heavens (Genesis 1:14; 15:5). As such, they were regarded as unworthy of worship because God had, by his own will and grace, made humans superior to them. In fact, the Hebrews were expressly forbidden to worship the stellar bodies (Exodus 20:4), the gods and goddesses who represent them (Jeremiah 44:17–25), or to participate in astrology (Isaiah 47:13). Hence, this unique theological ordinance differentiated the Hebrews, who viewed the heavenly bodies as made and moved by the will of God, from the superstitious heathen, who worshiped them in their own right.

• Highest Heaven (Third) – From the theological viewpoint, the most important use of the term Heaven is its reference to the spiritual domain, the abode of God himself. Numerous passages of Scripture speak of God as “the high and lofty One who inhabits eternity” (Isaiah 57:15), who has a parallel dwelling on earth and in heaven (1 Kings 8:12), and of whom Solomon said, “Behold, heaven and the highest heaven cannot contain thee” (1 Kings 8:27). It is that abode to which the Lord Jesus Christ said he was about to return (John 14:2). There is where the true tabernacle stands, of which the earthly tabernacle was merely a shadow (Hebrews 8:1–5). That abode of God was in view when the apostle Paul wrote of his visit or vision of “the third heaven” (2 Corinthians 12:2).(2)

One might ask how paradise fits into this scheme. The term paradise is often used interchangeably with Heaven when referring to the third heaven, the abode of God and the eternal home of the dead in Christ. The earliest occurrence of the term in ancient literature is found in the Septuagint, in Genesis 2 and 3. It is likely a word borrowed from ancient Persia dating back to the sixth century BC. It comes from a Persian word which can mean an enclosed space, park, or garden. In the book of Nehemiah, it is used to describe a forest (Nehemiah 2:8), in Song of Songs an orchard (Song of Songs 4:13), and in Ecclesiastes it describes Solomon’s campaigns to create gardens and parks (Ecclesiastes 2:5). The Prophets first gave this word its eschatological connotations, beginning with Isaiah 51:3. Isaiah promises that the eschatological Jerusalem will be like the Garden of Eden.

During the Second Temple period, paradise was considered one of the primary dwelling places for the righteous dead in the afterlife. The Testament of Levi presents the Messiah opening the gates of paradise for the saints (Testament of Levi 18:10–11), and is the earliest example of a religious use of paradise outside of the Old Testament.

The word paradise is used three times in the New Testament (Luke 23:43; 2 Corinthians 12:4; Revelation 2:7). In Luke 23:43, Jesus tells the repentant thief being crucified next to Him that “today you will be with me in paradise.” Paul, in 2 Corinthians 12:4, equated paradise with the third heaven when he stated that he “was caught up to paradise.” In Revelation 21:2, it is synonymous with “the New Jerusalem coming down out of Heaven from God.” In the book of Acts (also written by Luke) Peter is quoted saying that Christ’s soul dwelt in “the realm of the dead” (Hades) between the time of His death and resurrection (Acts 2:27, 31). This suggests that Luke considered paradise to be the abode of the righteous in the underworld.(3) If so, then in this reference to Hades includes a section for the righteous dead (e.g. Lazarus in Paradise), as well as a section for the unrighteous dead (e.g. the rich man in Torments), which were separated by a large gulf.(4) It would also reconcile Jesus’ statement to the thief on the cross with His comment to Mary after His resurrection not to hold onto Him as He had not yet ascended to His Father.

Another name for Paradise is Abraham’s bosom, which comes from the story of the rich man and Lazarus referenced above. This image is taken from the ancient practice of reclining at the table—sometimes actually reclining on the person next to you (see John 21:20). The Old Testament also used the expression “to be gathered to one’s people (or fathers)” (see Genesis 25:8; 49:33; Judges 2:10; 2 Kings 22:20), when referring to death. All individuals—just or unjust—would be “gathered to their people.”

Rabbinical teaching divided the state after death (Hebrew – Sheol) into two separate places, one for the righteous and one for the wicked. Christ’s expression of Abraham’s bosom is likely based upon this older usage, but also could mean something more. It is not possible to exactly determine what Christ meant—he uses this expression only in this one instance. The language he uses to describe His “Father’s house” seems to indicate the third Heaven (see John 14:2),(5) rather than Abraham’s bosom. 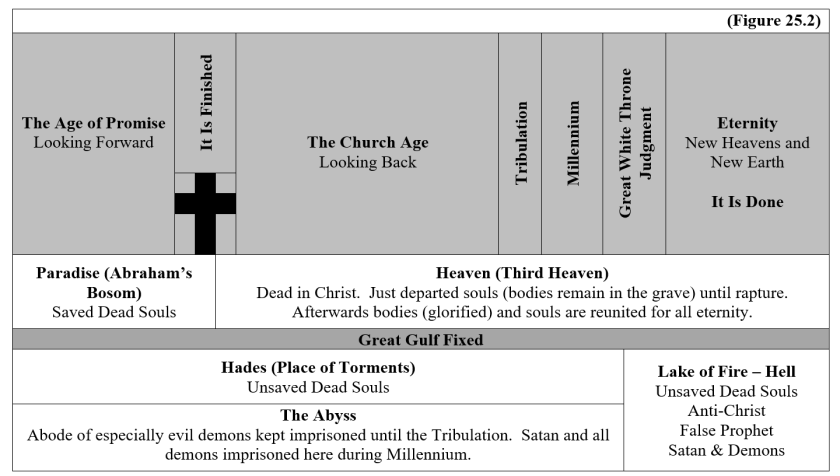 3 thoughts on “A New Heaven”