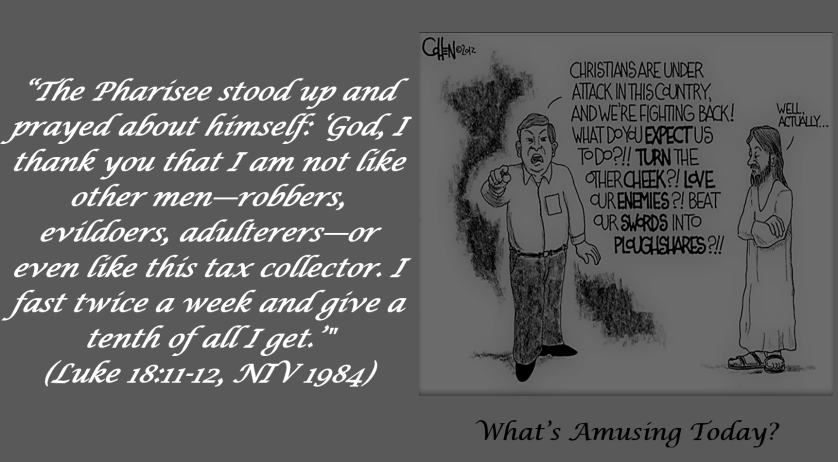 My Musings – It’s easy to dump on the Pharisees. After all, their name has become synonymous with self-righteous hypocrisy making them easy marks for criticism and condemnation.  But what if we substituted the word Pharisee in the above verses with the word Christian?  Is that how the world sees many of us?  Are they justified in seeing us that way?  We want to scream that they are way off base.  That we are under attack and being unjustly persecuted.  But we need to be very careful before we dismiss it outright.  For you see, “the problem with self righteousness is that it seems almost impossible to recognize in ourselves. We will own up to almost any other sin. but not the sin of self-righteousness. When we have this attitude, though, we deprive ourselves of the joy of living in the grace of God. Because you see, grace is only for sinners.” ― Jerry Bridges, evangelical Christian author, speaker and staff member of The Navigators.

We might think, why should we care what the world thinks of us?  Well, if they are wrong, and perhaps they are in most cases, we need not care.  Jesus did say, after all that in this world we will have persecution, and that if the world hated Him, we should not be surprised if they hate us too.  But if they are right, even about a minority, we should care very much.  For Jesus also said they (the world), will know we are His followers if we have love for one another.  And if they do not see His love in us and from us, then the truth that we are proclaiming will not seem very much like the truth.

Another reason we should care is because Jesus cares.  He had nothing but condemnation and anger (yes, anger) for the teachers, scribes and teachers of the law that exhibited such self-piety and hypocrisy.  His attitude was not a casual “well actually,” but a very much heated “woe to you!“…”You snakes! You brood of vipers!”  Whoa.  Let’s take a closer look at these “woes” from Matthew 23, NIV 1984, and learn from them.  We do not want to become 21st century Pharisees.

My Advice – I am sure that the vast majority of Christians are not this way, or at least not blatantly.  But are there times we “deny” God’s grace to those whose sins seem greater than our own?  On occasion, is the way we behave on the outside inconsistent with how we are on the inside?  Do we overly focus on certain evils (“strain out a gnat“), to the exclusion of others (“swallow a camel”)?  Are we so self-absorbed by the “injustices” that we must endure that show no mercy to others?  Let’s just say whoa to woe.