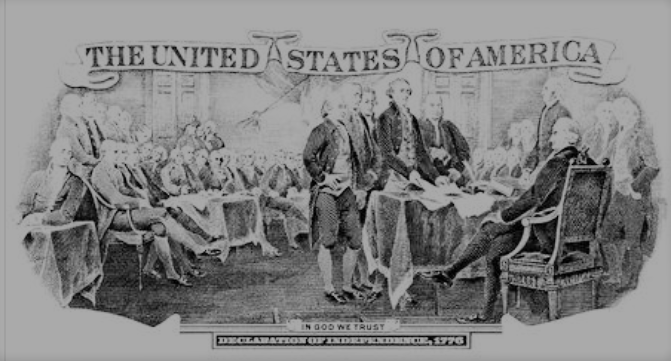 Romans 13:1-2 – Everyone must submit himself to the governing authorities, for there is no authority except that which God has established. The authorities that exist have been established by God. Consequently, he who rebels against the authority is rebelling against what God has instituted, and those who do so will bring judgment on themselves. (NIV 1984)

In Congress, July 4, 1776 – The unanimous Declaration of the thirteen united States of America, When in the Course of human events, it becomes necessary for one people to dissolve the political bands which have connected them with another, and to assume among the powers of the earth, the separate and equal station to which the Laws of Nature and of Nature’s God entitle them, a decent respect to the opinions of mankind requires that they should declare the causes which impel them to the separation.

We hold these truths to be self-evident,
that all men are created equal, that they are endowed by their Creator with certain unalienable Rights, that among these are Life, Liberty and the pursuit of Happiness — That to secure these rights, Governments are instituted among Men, deriving their just powers from the consent of the governed.

We, therefore, the Representatives of the united States of America, in General Congress, Assembled, appealing to the Supreme Judge of the world for the rectitude of our intentions, do, in the Name, and by Authority of the good People of these Colonies, solemnly publish and declare, That these United Colonies are, and of Right ought to be Free and Independent States.

And for the support of this Declaration, with a firm reliance on the protection of divine Providence, we mutually pledge to each other our Lives, our Fortunes and our sacred Honor. (emphasis added)

George Washington – The propitious smiles of Heaven can never be expected on a nation that disregards the eternal rules of order and right, which heaven itself has ordained.

James Madison – We have staked the whole future of American civilization not on the power of government, far from it. We have staked the whole of our political institutions upon the capacity of mankind for self-government, upon the capacity of each and all of us to govern ourselves according to the commandments of God. The future and success of America is not in this Constitution, but in the laws of God upon which this Constitution is founded.

Calvin Coolidge – The foundations of our society and our government rest so much on the teachings of the Bible that it would be difficult to support them if faith in these teachings would cease to be practically universal in our country.

John F. Kennedy – The rights of man come not from the generosity of the state but from the hand of God.

Ronald Reagan – Of the many influences that have shaped the United States into a distinctive nation and people, none may be said to be more fundamental and enduring than the Bible.

Barack Obama – When a typhoon hits the Philippines or schoolgirls are kidnapped in Nigeria or masked men occupy a building in Ukraine, it is America that the world looks to for help. So, the United States is and remains the one indispensable nation. That has been true for the century past and it will be true for the century to come.

Writing on the Wall – But you did not honor the God who holds in his hand your life and all your ways. Therefore he sent the hand that wrote the inscription. This is the inscription that was written: mene, mene, tekel, parsin. This is what these words mean:

Mene: God has numbered the days of your reign and brought it to an end.
Tekel: You have been weighed on the scales and found wanting.
Peres: Your kingdom is divided and given to the Medes and Persians. (Daniel 5:23-28, NIV 1984)

My Musings – There is no doubt in my mind that the United States of America was “established” by God and has experienced the blessings of God because, as a nation:

But lately, within perhaps the last generation, these beliefs and attitudes are no longer held to be “self evident” to an increasingly large portion of “we the people.” Consequently we are in danger of dissolving the spiritual “bands which have connected us” with our Creator.  To a large extent:

“We have forgotten God. We have forgotten the gracious hand, which preserved us in peace and multiplied and enriched and strengthened us, and we have vainly imagined, in the deceitfulness of our hearts, that all these blessings were produced by some superior wisdom and virtue of our own. Intoxicated with unbroken success, we have become too self-sufficient to feel the necessity of redeeming and preserving grace, too proud to pray to the God that made us” (Abraham Lincoln).

Not only have we forgotten these things, but we have substituted arrogance.  We have shifted the focus off our God and onto ourselves.  We do not “honor the God who holds in his hand [our] life and all [our] ways.   We do not “stand alone” and we are not “indispensable.”

Mene: God has already numbered the days of our reign and will soon bring it to an end.
Tekel: God has weighed us on His scales and found us wanting.
Peres: Clearly our nation is divided as it has ever been before (with the possible exception of the Civil War) and our standing as a God-favored nation will soon be given to another.

My Advice – My advice means very little in such a large matter.  But here is some advice that carries immense weight:

2 Chronicles 7:14 – If my people, who are called by my name, will humble themselves and pray and seek my face and turn from their wicked ways, then will I hear from heaven and will forgive their sin and will heal their land (NIV 1984).

Notice where the humbling, praying, seeking God’s face and turning from wickedness is directed at – God’s people who called by His name (Christians).  The responsibility is ours, but there is still hope that God will hear, forgive and heal.  “Because Christianity is [still] the only religion that changes the heart.”  The only religion that can change a nation for good.

One thought on “Revolutionary Declarations”